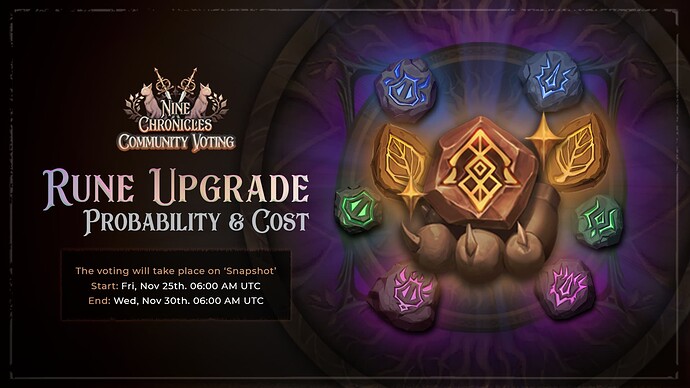 This document contains a voting proposal on the rune activation and upgrade cost, which will be included in v100340 of Nine Chronicles. The proposal will describe 2 different cost schemes for upgrading ‘Rune of Bleeding (Fenrir),’ one of the 5 runes premiering. [Plan

] One of the options will cost less compared to the to other option. However, it will have a lesser success rate. [Plan

] The other option will cost more but with a 100% success rate. Through community voting, we would like to draw a decision on the direction of the upgrade schematics and would like to set it as a future reference for runes that will be added in the future.

We have acknowledged the burden on the players due to the success rate of equipment upgrades beyond +4 being less than 100%. However, equipment upgrades based on probability are widely prevalent in other games. And most of the content in Nine Chronicles provides a player experience based on probability. Therefore, it is not easy to simply exempt the probability from rune upgrades. In addition, this decision greatly influences the player’s gaming experience; therefore, deciding this via community voting would be suitable in terms of decentralization of Nine Chronicles.

The Rune System is planned to be released around mid-December. The outcome of community voting will solely affect ‘Rune of Bleeding (Fenrir)’ which can be obtained from the World Boss: Fenrir. However, the team will value and definitely consider the decision in setting probabilities for other runes as well. 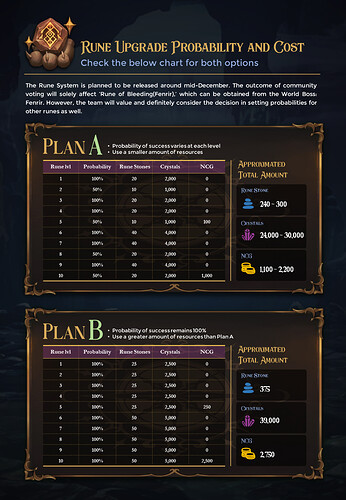